AccraFab’s 155,000 square-foot facility resides in Liberty Lake, Washington – approximately 20 minutes from Spokane and only minutes from the Idaho border.  We have excellent accessibility to the Interstate, multiple shipping distribution centers and the Spokane International Airport, making delivery options easy. Our state of the art facility ensures that we can help with your contract manufacturing project. 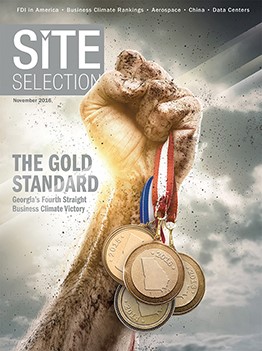 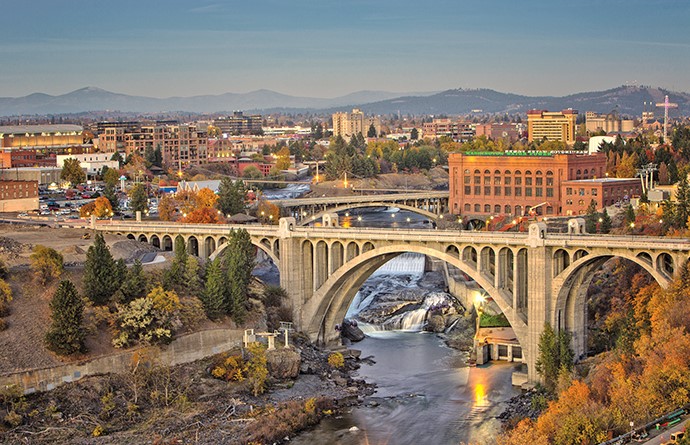 Had Accra-Fab gone ahead with a relocation to Post Falls, Idaho, from its headquarters in Liberty Lake, Washington, this summer, its 174 workers would not have been all that inconvenienced. Post Falls is just a few miles east of Liberty Lake, near Spokane, on the Idaho state line. The main disruption would have been moving the company’s manufacturing equipment.

Accra-Fab is a contract manufacturer and sheet metal fabricator that’s also active in engineering, design, prototyping, welding, finishing and assembly. From its 155,000-sq.-ft. (14,400-sq.-m.) facility in Liberty Lake the company serves a diverse customer base in the aerospace, test and measurement, energy, telecommunications, medical, and precision-industrial equipment fields. 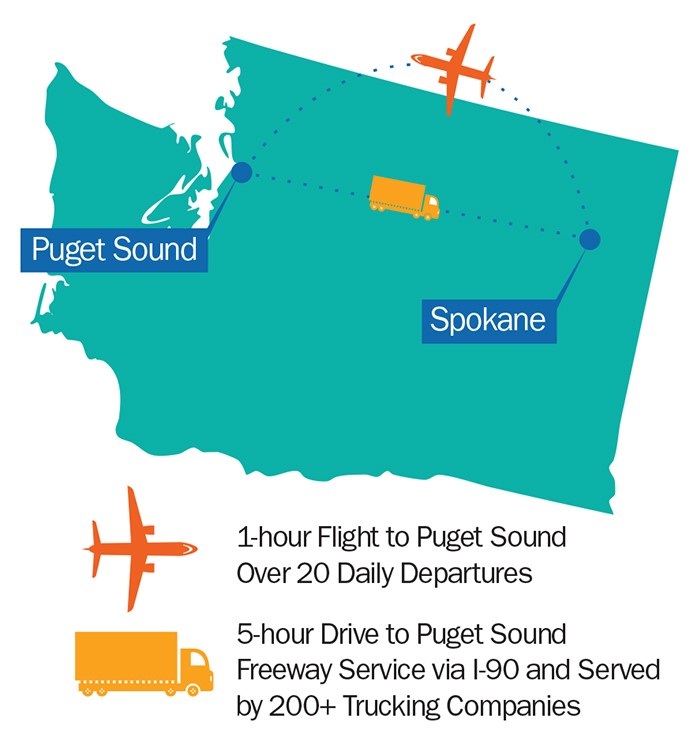 In the aerospace industry, its fastest-growing market, “We’re a Tier 2 supplier to the Tier 1 suppliers to Boeing and Airbus,” says Greg Konkol, Accra-Fab’s CEO. The company has leased its current facility since 2001, and it plans to grow its workforce to about 200. It can do that in its existing facility, but building a new one elsewhere in Washington, or in nearby Idaho with its business climate attributes, was very much an option.

“We really entered this project with eyes wide open,” relates Konkol. “We were very open to relocating to the Post Falls, Idaho, area on the border or to staying in Washington. One of the data points that was a large consideration for us was the cost of the disruption of the move — we have a lot of large manufacturing equipment. Relocating it is quite an endeavor.”

It was never a case of having to leave — the company had room to grow and to add new equipment. But it was hard to ignore Idaho’s cost benefits just up the road. 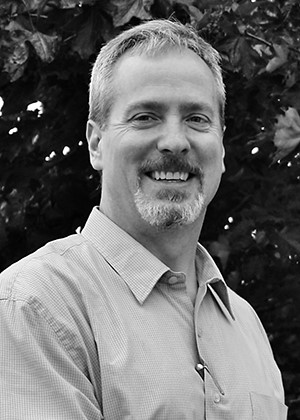 The way the cards fell, we stayed in Washington, but it could have been that we went to Idaho just as easily.”

“Even though Idaho has income tax, when you look at their taxing structure — not having B&O [business & occupation] taxes, having a lower sales tax, lower property taxes and lower permitting costs than in Washington — it’s a very competitive situation on the east side of the state relative to the west side,” says Konkol. “The local economic developers were able to get the attention of the state [economic development] folks and tell them we need some help and support over here. It’s a different business environment here than it is on the west side of the state.”

Working Behind the Scenes

The state came through with workforce training assistance ultimately worth about $200,000 to Accra-Fab, says Konkol. “It helped. It was one of the factors in remaining in Liberty Lake.” Another was not wanting to exit a location that knows how to help businesses grow. When northern Idaho or any other contender for direct investment goes up against the Spokane region, they’d best be prepared. 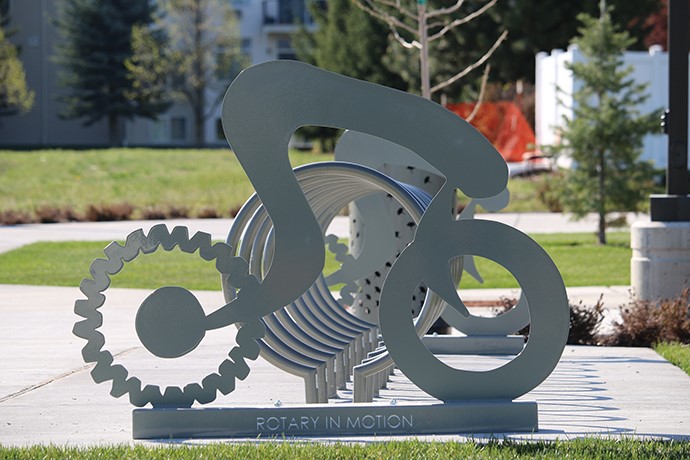 “It was primarily Greater Spokane Inc. that worked with us, but also the Liberty Lake mayor, Steve Peterson, was very active in the process,” says Konkol. “Also the Spokane International Airport folks. Every opportunity they got, they grabbed an ear to make the case that we need to support and promote aerospace business in this region, which supports the airport’s business. They were real proponents and promoters and talked to politicians and others to help and support the cause of keeping us here.”

We need to do our job from a regulatory standpoint in the most efficient way possible so we can get business in the business of doing business.”

Spokane County Commissioner Al French might be the region’s biggest booster and was a formidable advocate for keeping Accra-Fab in Liberty Lake, adds Konkol, who has high praise, too, for the northern Idaho economic developers he worked with. “The local economic developers from both states were very supportive. They get it. They get that what drives this economy is manufacturing and creating jobs and creating value for society. It’s not all services — there has to be that foundation of creating hard goods or intellectual property. It was a close race between the sites in Washington and Idaho, and we’re very appreciative of all the work and support the Idaho folks gave us. The way the cards fell, we stayed in Washington, but it could have been that we went to Idaho just as easily.”

Commissioner Al French has nothing against northern Idaho, but he would rather eastern Washington companies stay in eastern Washington. With a decades-long career as a real estate developer and architect in the US Northwest, French now finds himself as an elected official from the private sector, “now on the other side of the counter trying to make everything that is part of that process better.” 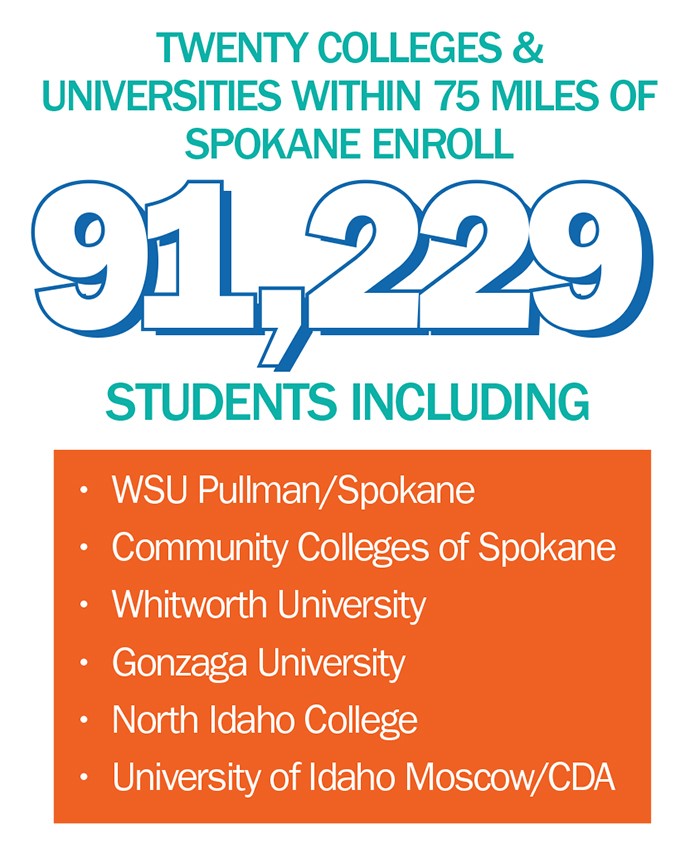 Five years ago, recalls French, he worked with Caterpillar on siting a 600,000-sq.-ft. (55,740-sq.-m.) distribution center that the site selectors expected to be up and running “on the fast track. I told them we could get that facility permitted here in two weeks or less. We delivered the permit in 12 days. If this project had been done on the other side of the state, it would have taken months to get a permit. We did it in less than two weeks. Businesses don’t make money in government processes. They make money by selling a product. We need to do our job from a regulatory standpoint in the most efficient way possible so we can get business in the business of doing business.”
Like Accra-Fab, Exotic Metals Forming Company, based in Kent, Washington, chose Spokane County for its metal fabrication facility specializing in titanium and nickel alloys. It’s a key supplier to Boeing, whose manufacturing plants are in the Seattle area — a five-hour drive or one-hour flight from Spokane. “Part of it is we don’t have the traffic congestion, the cost of living, the bureaucratic processes you find on the other side of the state,” says French. “We’re very serious about being business friendly.”
It’s in the Code
Accra-Fab and Exotic Metals are just two of about 120 aerospace and MRO companies in and around Spokane — an established cluster by any measure. More than 240 are based in the broader region. The cluster’s center of gravity is the Spokane International Airport (airport code GEG) and its administrators, who know well the value of the facility to eastern Washington, the entire state and the Northwest. They’ve even turned the code into a business expansion slogan: Generating Economic Growth. 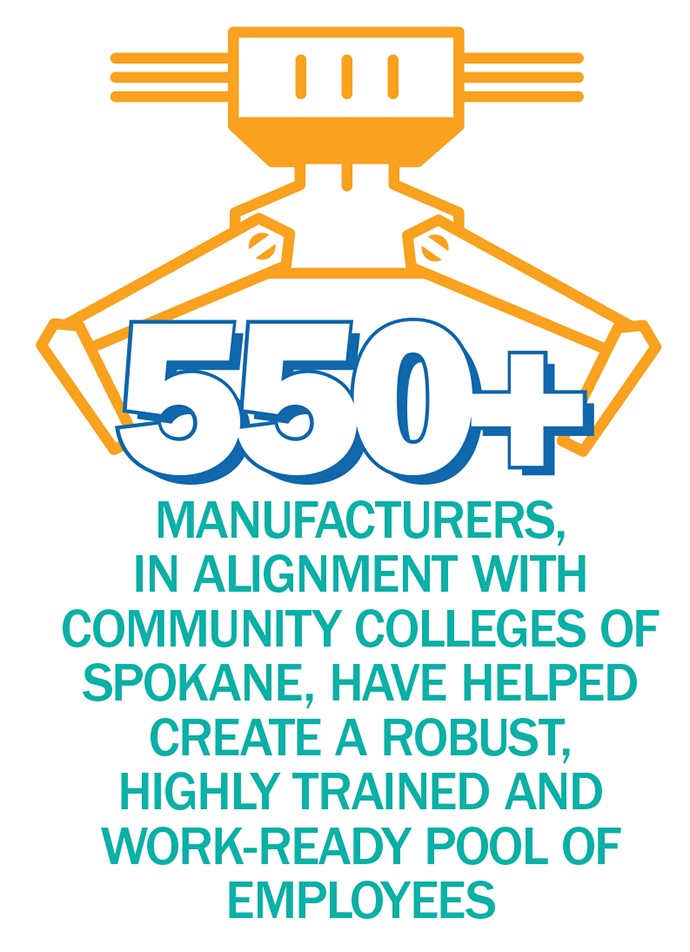 “Spokane is unique. It’s a hub for a three-state region as well as customers from southern British Columbia and Alberta,” says Todd Woodard, the airport’s director of marketing and public affairs. “They depend on us for air cargo and passenger service.” GEG is home to several airfield and aircraft services companies that require runway access (MRO, aerial firefighting, flight support services and others). And those businesses require support from other aerospace companies in the region, he relates.
“The stronger we make the aerospace cluster regionally, the stronger the airfield will grow,” says Woodard, who a dozen years ago helped found the Inland Northwest Aerospace Consortium (INWAC) to organize and cultivate the Spokane area’s aerospace industry; Accra-Fab’s Greg Konkol was INWAC’s 2016 Chair. “We look at the entire ecosystem, particularly on the aerospace side as being a very important industry for us to engage with. Given our unique assets, like runway access, we’re even more inclined to look at aerospace as a sector we want to get behind and grow.”
Nearby Fairchild Air Force Base is a major source of maintenance and other workforce talent to the region and to the aerospace cluster in particular. “We’re a very supportive community when it comes to the military, and the airmen are very supportive of our veterans,” says Woodard. “The whole region is very collaborative.”
More than 91,000 students are enrolled at 20 colleges and universities within 75 miles of Spokane. These include Gonzaga University, University of Idaho Moscow, Washington State University Pullman/Spokane and Community Colleges of Spokane, which is the largest community college system in Washington and is home to the oldest airplane and power plant (A&P) program in the state. “That originates from the labor at Fairchild and its abundance of trained labor,” says Woodard. “We want them back in the workforce. We want them to stay here.” 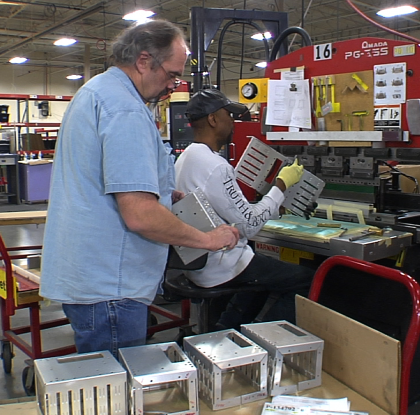 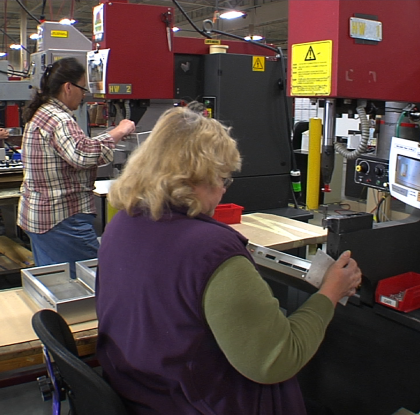 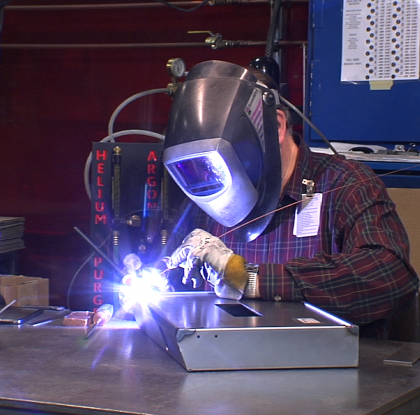 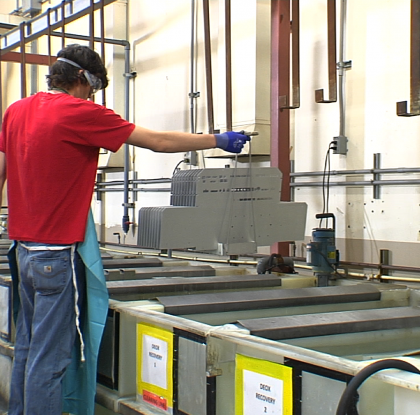 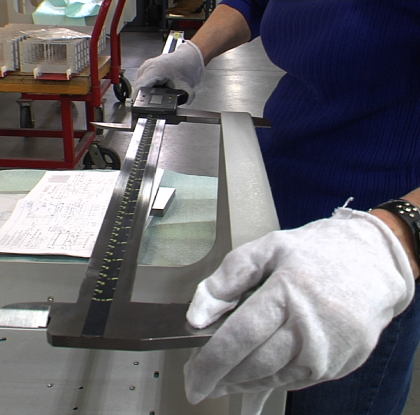 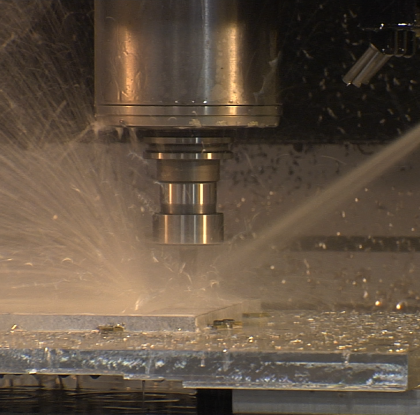